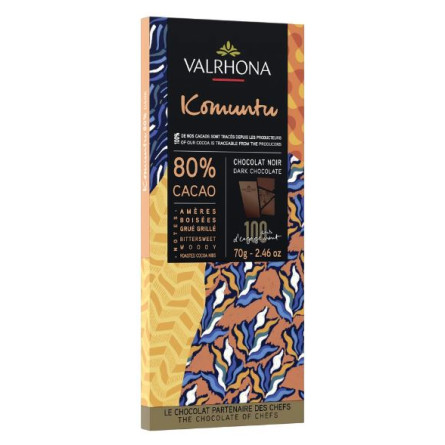 To celebrate together Valrhona's 100th anniversary, Valrhona has created with you Komuntu.

Suppliers, cocoa partners, employees, customers, you were all involved in every step of the way: from finding a unique taste to choosing a packaging design with symbolic patterns which reflects the diversity of our different cocoa-producing countries. All stakeholders of the ethical chocolate world, we embody Komuntu.

Its name is a contraction of “Komunumo” which means community in Esperanto and “Ubuntu” an African concept which states “I am, because we are”.

Komuntu is a chocolate created with you, for you.

The whole supply chain has helped create Komuntu’s flavor. It tells the story of all the people we have met around the world. Thus, the blend of its cocoas has a singular aromatic character. Because Komuntu is the physical embodiment of our commitment to a fair, sustainable chocolate sector and creative, responsible gastronomy, during our 100th anniversary year we are redistributing all the profits made to cocoa producers.